We have the power to end Hepatitis C in my lifetime. And yet...here we are.
When someone gets diagnosed with Hepatitis C (HCV), they don't all react in a similar fashion, we are a hodge-podge of strangers who have one thing in common.

Some turn to faith, Some discard religion, others ignore the growing problem, and many still have no idea. There are so many different ways we're spread, but we all agree on something.

So the ACA won and is here to stay, the supreme court ruled in favor 6-3....but what did we win?

Presently certain medical groups have combined forces with government red tape, stopping access to a cure for millions.
In order to truly go into the depth of this issue I need to stress certain facts and logic.

Hepatitis C is an epidemic of potentially horrific trouble, in a modern society it can travel  undetected. Poor policy presents potential population problems.

Drug use like this is uncommon, he is a modern shitty Typhoid Mary of sorts.

Remember that a disease infects an individual but affects a family.
When disease affects families, millions of families, it impacts the nation.

and now we have the power, the technology to cure (SVR) over a hundred million people of HCV.

Cure rates are in the 90% range, from new Direct Acting Antiviral (DAAs). We're familiar with the names: Sovaldi, Veikira Pak, Olysio, Harvoni, etc. (and more are in the pipeline from big guns like Merck and Johnson & Johnson)

It's why the World Health Organization has been so vocal about HCV recently. It's why we've seen more news about HCV float to mainstream in the past two years than in the previous ten. It's why the CDC has been building up their Know More Hepatitis campaign.
It's Hope for over a hundred million people worldwide. In the US our chronic hepatitis C population is around 2.7-3.9 million people.

For reference San Diego County has a population of 3.2 million people, Same as Phoenix Arizona. There are more people with HCV than the entire population of the state of Mississippi, Iowa, Connecticut, Utah or Nevada.

There are many options regarding HCV treatment, and certain treatments will have better "cure"(SVR) rates than others for different genotypes.

The longer someone is infected with HCV the more damage it will do, the longer the treatment takes, the less likely the cure rate.

Lets look at Metavir scores, as it's a common liver metric.


As a person with F4 cirrhosis I took 24 weeks of Harvoni, and could have possibly been extended because I am the rare case of failure.

Someone with F0 can often take 8 weeks.

Medicaid is the government sponsored healthcare in the US for those making 138% of the federal poverty level or lower.
Which is about $16,242 for a single person, or $33,465 for a family of four.

Medicaid is presently placing restrictions on access to HCV meds: in the form of requirements and testing.

A decent liver panel and Fibrosis scan can tell a doc what they need to know. Biopsies and other function tests are often not necessary for F0 patients.
What is happening in Medicaid is the restriction of access to cures that will best fit their genotype, by requiring you to have a certain level of damage, and pay for the unnecessary tests in the mean time.
At those limits of about $16,242 and $33,465, people can see a max out of pocket of $812 and $1,673 respectively.
But as people in Medicaid rise above the 150% of the Federal Poverty level (FPL) the costs become nearly unmanageable. as they'll quickly hit the out of pocket maximum, and when your take home is at ~$1,400 income per month, $1,059 over one or two months is hard.


Wait. Go back to that picture.
F4 cirrhosis is borderline liver transplant.
Those four states require permanent liver damage before they treat you.

It's even more troublesome for people at 100%-138% federal poverty level, If they are presently uninsured, and subsequently diagnosed, and then require Medicare. They could see costs in the tens of thousands for the test alone if they were to take them.

Presently different states can impact how fast a person hits that max out of pocket. For those of you unfamiliar with the nuances of Medicaid there are laws in nearly half of the states called carve-out or carve-in laws. The fundamental difference is that Carve-out has a larger rebate, and thus costs less to both the patient and taxpayers. Carve-in is more intricate offering more options by using the Medicaid Managed Care Organization of the patient's choice. This often results in allowing the insurer to select the methods and restrictions on medications, as well as create a faster operating network to minimize delays in coverage. It's higher price-point benefits the Insurers, and costs marginally more. 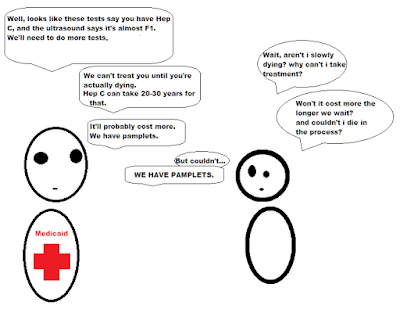 So what can we do?

Well the ACA's advancements will continue growing in the existing US healthcare market, and Insurers will become more open to its use once the tax policies are ironed out by some future law. Presently the ACA's Medicaid expansion has given Managed Care Organizations better tools for price reduction.

But there's a whole 'nother aspect of the price point.


Hep C (HCV) would likely benefit by being carved-out, however it does not have a high degree of outreach or education, and it has lots of expensive options. Many combinations of different RXs and drugs which vary by genotype.
To make it more shitty, it is cheaper overall for everyone if the treatment is offered earlier, before serious liver damage.

But since we're dealing with politicians arguing bottom lines...
Let's forget that apparently we're not dealing with the Silent Epidemic (HCV) fast enough, the quality of life lost, the loss of work-hours, the pareto loss
(pareto loss is an overall shrinkage in market capacity), The affect it has on a family unit, and the potential 10% job loss due to the stigma

AIDs felt this frustration over a decade ago, when looking at Carve-outs because of increasing costs.

A carve out policy for HCV is more likely to positively impact HCV, so long as Medicaid focuses on comprehensive care for HCV patients. (and governors are looking at it just a few months ago.)
The case for the now larger pool of Medicaid recipients would be able to help ensure better discounts than five years ago. (South Carolina started one yesterday! July 1, 2015)
But as we see with Medicaid's current restrictions on HCV care and the gratuitous testing requirements, the bottom line is where it counts.

WE HAVE THE POWER TO END HCV IN MY LIFETIME. And yet...here we are.

Presently, HCV information and advocacy is growing, the stronger we are linked together the better we can help each other.

When my liver became decompensated and I entered the transplant list, I saw the world through comprehensive care for the first time, prior to this I had elements of compressive care offered to me, but not required. When HCV comes into your life, the future can be cloudy, comprehensive care can help this. Depression, Anxiety, Fatigue, to Stress, the stigma and nature of HCV combine with chronic hepatitis, can show early on in ways you don't notice at first.

It's hard to see behind unopened doors. There is need for therapy beyond groups and our ever growing online communities, I hope that within the next few years we can see the landscape changing.
Posted by Rick Nash at 12:20 PM